Unlock the USA: IT in Minnesota

Minnesota is a leading US cluster for tech innovation across a wide range of sectors, from healthcare to industrial & energy automation, agriculture & food processing, and retail & commerce. Since the early days of computing when pioneers like IBM and Honeywell formed what has been dubbed “the Silicon Valley before the Silicon Valley“, Minnesota has developed a unique ecosystem for IT companies:

- Despite a small population, Minnesota has one of the largest IT workforces in the US, including some 40.000 software developers, and an annual influx of nearly 3.000 IT graduates.

- The „Twin Cities” Minneapolis & Saint Paul are a top 10 US science & technology clusters as measured by scientific publications and patent applications.

- The University of Minnesota is among the top 10 on technology transfer and commercialization. 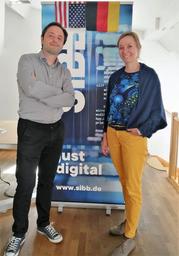 Another key component of the Minnesota tech ecosystem are the network effects of a comparably small but highly concentrated business community: due to the highest concentration of corporate headquarters in the country (including 18 Fortune 500 companies), tech start-ups have better exposure and access to corporate partners and executive level talent than anywhere else in the US.

This is most obvious in healthtech where the local Medical Alley association gathers the leading US hospital (Mayo Clinic), the largest US medtech company (Medtronic) and the largest US health insurer (United Health), but also hundreds of startups that raised more than 3 billion $ of capital in 2021. More recently, similar synergies are arising e.g. between big financial services players like US Bank Corp or Allianz and some 130 fintech startups.

Access to this ecosystem has encouraged tech giants from Google to Amazon to set up tech hubs and offices in Minnesota or, as in the case of Arctic Wolf, one of the fastest growing US cyber security companies, to actually relocate their Headquarters from Silicon Valley to Minnesota.

The Minnesota Department of Employment and Economic Development (DEED) – headed by a former Google Executive – supports this ecosystem through a wide range of measures with a clear focus on SMEs and startups, from seed financing programs such as Launch Minnesota to long term infrastructure projects such as Destination Medical Center. Within DEED, the Minnesota Trade Office (MTO) takes care of international companies willing to tap or join the Minnesota ecosystem by hosting trade missions and pitch events and providing individual landing services. The Berlin based MTO European Representative can serve as a first point of contact for your questions, plans and ideas.

Would you plan to expand your business network to Minnesota?
Please contact Magdalena for more details: